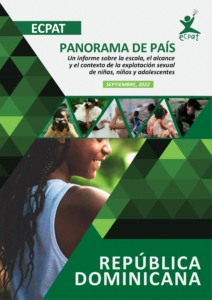 ECPAT International is proud to announce the release of a new ECPAT Country Overview.

Children in Dominican Republic face greater vulnerability to sexual exploitation, resulting from failures in access to education and the normalisation of violence against women and girls.

DOMINICAN REPUBLIC—In cooperation with MAIS and the Down to Zero Alliance, ECPAT International is pleased to announce the launch of the Dominican Republic Country Overview. The report sheds light on the scale, scope, and context of the sexual exploitation of children, and suggests concrete actions to put an end to this crime in the country. The report findings will be presented to the Special Representative of the United Nations Secretary-General on Violence against Children in preparation for her next official visit to the country.

Key findings and recommendations for action discussed in the report include:

Read the full report in Spanish here.
Read a summary of the findings in English here.
Read our recommendations for effective extraterritorial jurisdiction and extradition legislation here.

ECPAT Country Overviews comprehensively present all existing research and publicly available data on the sexual exploitation of children in a given country. These also include a detailed analysis of the legal framework and existing policies applied to address such crimes. These reports provide an evaluation of the achievements and challenges achieved thanks to the implementation, the existing neutraliasation actions and, in turn, they suggest concrete priority actions to eliminate the sexual exploitation of children in the country.

ECPAT International is a global network of more than 122 civil society organisations, in more than 100 countries, working towards the vision of ending the sexual exploitation of children. With over 30 years of experience in engaging and managing multi-stakeholder processes and partnerships at the national, regional and global levels, ECPAT works to end the sexual exploitation of children.

MAIS has been an NGO member of the ECPAT network since 1998, assuming the mandate, content and recommendations of the ECPAT 1996 Agenda for Action. It has dedicated all of its work to the prevention of sexual exploitation of children in the northern part of Dominican Republic by Dominicans and the prevention of the use of children in sexual activities in travel and tourism. In the last 7 years, MAIS has been part of the Down to Zero Alliance, which is made up of a group of support institutions for the execution of Down to Zero in 12 countries from different regions of the world. For intervention in the tourism industry, MAIS is a representative in Dominican Republic and the Caribbean area of The Code (The Code of Conduct for the Protection of Children from Sexual Exploitation in Travel and Tourism).

About the Down to Zero Alliance: