This International Women’s Day, the sexual exploitation of children shows how power still rests in the hands of men

As we commemorate International Women’s Day this year, I’m struck by an air of optimism in the tone of some media coverage.

The perception seems to be that the #MeToo campaign — one of the most viral and powerful social movements of recent times — has brought the issue of sexual abuse to the fore. As a result, the power structures that have kept women and girls oppressed are beginning to show cracks. Impunity for men who have abused their power is being challenged.

And this may be true for the most privileged…

But for much of the world, this is not a reality. The global figures relating to sexual exploitation and abuse tell a very different picture.

More than one third of women worldwide have experienced sexual violence.

Although boys and men are often victims as well, the vast majority of victims of online child sexual exploitation are girls, while the vast majority of offenders are male. More than one-third of women worldwide have experienced either physical or sexual violence at some point in their lives, and for many – this will include while they were children. Women and girls together account for 71 per cent of trafficking victims, with girls representing nearly three-quarters of child trafficking victims. Three quarters of those women and girls who are trafficked are done so for the purpose of sexual exploitation.  And most victims of early marriage are girl children.

Women and girls together account for 71 percent of trafficking victims.

In much of the world, far from the sometimes star-studded glare of the #MeToo lens, poverty, inequality, impunity for offenders, corruption, weak rule of law and poor enforcement are used to enslave, traffic and sexually exploit girls. It is mostly girls who bear the brunt of this trade in humans and this abrogation of human rights. In places where patriarchal systems continue to dominate sexual relationships, where boys are viewed as assets and girls are often perceived as a liability, sexual abuse and exploitation are frequently tolerated or ignored.

Reporting of sexual abuse and exploitation tends to be low since it potentially damages the girl, rather than the offender.

For example, in many parts of the world, marrying off a girl who has been sexually abused is nearly impossible. This contributes to low rates of reporting, since telling authorities potentially damages the girl, rather than the offender. In some places, this gender discrimination, which encourages sexual exploitation and abuse, is formalized in law. Many countries require a lower age at marriage for women as compared to boys. Many countries are yet to formalize the sexual exploitation and abuse of children into law, while others do not recognize new forms of exploitation, such as online grooming or ‘sextortion.’ We are seeing massive growth in the sexual exploitation of children by travellers and tourists, and millions of images of child sexual abuse are uploaded, accessed or disseminated online every day.

This International Women’s Day, we must remember that although the sexual exploitation of children through trafficking, early and forced marriage, prostitution, by travellers and tourists and online is first and foremost a human rights issue – it is very definitely a starkly gendered issue as well. We need to tackle these problems through the lens of a gender-based strategy.

All girl children have the right to freedom from violence, torture, sexual abuse and exploitation. A world free of gender discrimination includes a world free of sexual violence against children. 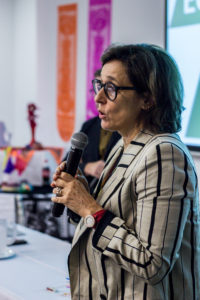