The dark side of Cancún: Child sexual exploitation

According to a recent report by ECPAT Mexico and partners, children in the Quintana Roo region are exploited through prostitution and production of online child sexual abuse material – and it is often tourists fueling this crime. This week, ECPAT International, ECPAT Mexico, Defence for Children – ECPAT Netherlands and The Code representatives just met with tourist facing businesses and the government to discuss how to better tackle this problem. The participants face a complex crime, with multiple manifestations.

“The sexual exploitation of girls and boys is a problem all over the globe – but is especially acute in popular destinations, with authorities facing multiple challenges in protecting children. Local police estimate that 3-4 out of 10 female victims of sexual exploitation in the region are children.”

– Norma Negrete, from ECPAT Mexico at the meeting.

Frequently, high school students in Cancún are targeted by organized criminals. Children are lured into prostitution and/or groomed to take part in online sexual abuse. In some cases, even “catalogues” of children that are “on offer” are produced by offenders. Children in Cancún are sometimes sold to tourists through traditional “escort” style services – and the “sugar daddy” phenomenon is becoming prominent. Although girls are disproportionally affected by this crime, boys and adolescents are also targeted. At the same time, the crime of sexual exploitation is also associated with abductions in the region, with some children abducted from communities within Mexico, who are “auctioned for their virginity.”

Children as young as 8 years exploited

The youngest known boy victim in Cancún was eight and the youngest known girl victim was 10 years- old. Vic­tims are most likely to be domestic migrants – often girls with little economic resources and a history of family violence. Migrants from Cuba, Colombia, Brazil, Venezuela, Guatemala, El Salvador, Honduras, Belize, Eastern Europe and Italy are also often victims in the region – and children from the local LGBTQI-population are particularly at risk.

Spas, table dance places, hotels, ‘casas de cita,’ luxury apartments located in residential units and houses where victims are locked inside and guarded by organized criminals are the most common sites for this crime. Staff from travel agencies located at the airport, taxi drivers, bellboys, bracelet sellers, waiters and barmen, security guards, some police, migration personnel and public officials take part in the supply of children for sexual exploitation. 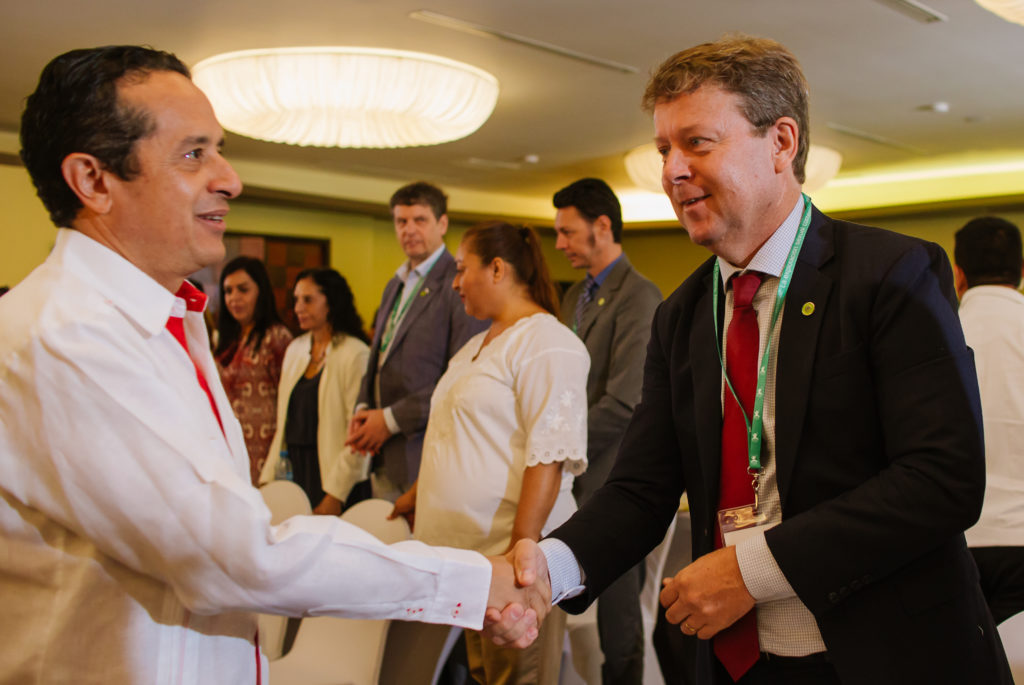 The forum was a political success, with tourist businesses, the Mexican local and state governments committing to the protection of children. The governor of the State of Quintana Roo, Carlos Manuel Joaquin González, signed a collaboration agreement that will see ECPAT train more children in schools to raise awareness about the issue. The agreement will also see the state government working with private businesses to encourage them to become members of the Code and to introduce child protection policies. The Municipality of Benito Juarez also presented a renewed Pact for Children, specifically including measures to prevent and combat the sexual exploitation of children.

“Eyes and ears are needed everywhere to ensure children are safe from travelling child sex offenders. Hotel workers, taxi drivers, travel agents, waiters – and especially travellers and tourists themselves need to report when they see something suspicious.

In Cancún, attentive ‘snowbirds’ [retired people who migrate to the region during the northern hemisphere winter] and even ‘spring breakers’ can play a key role. Don’t look away! Report the sexual exploitation of children.”

At the same time, the forum also saw the booking and travel company TUI Mexico and 11 RIU hotels, elevate their commitment to protecting children by signing up to The Code. The staff of TUI Mexico and RIU hotels have recently been trained to recognize and report any suspicious signs of the sexual exploitation of children.

The forum was organized as part of a project implemented by ECPAT Mexico and ECPAT International, financed by the Dutch Ministry of Foreign Affairs and TUI Care Foundation, and focuses on the protection of children in Phuket, Thailand and Cancún.