ECPAT International was founded in 1990 after a group of concerned activists gathered together to launch a campaign against the growing number of travelling child sex offenders in Asia. Since then, ECPAT’s work has evolved from working with the police to rescue sexually exploited children, to directly providing services to victims, leading major research efforts, and to lobbying decision-makers to give children greater access to justice.

At the occasion of our 30th anniversary, we look back together with our members to revisit our incredible journey but also asked what our hopes are for the next 3o years. 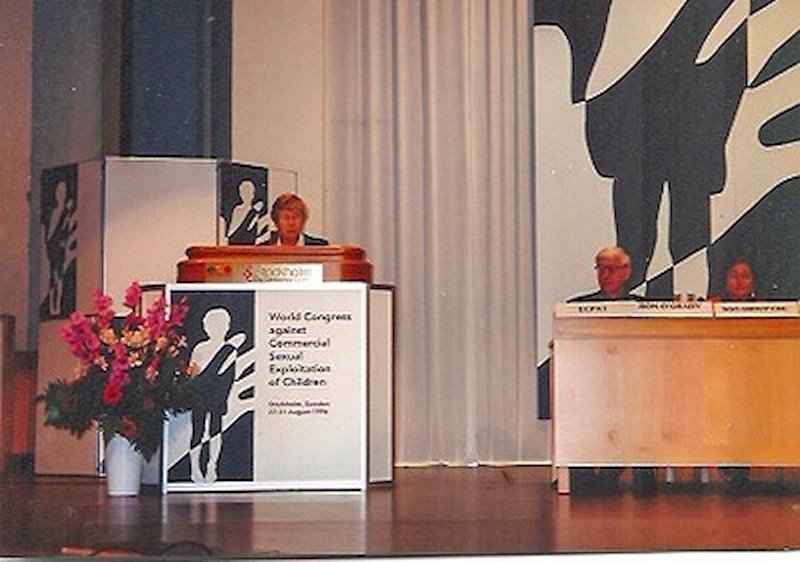 In 1997, ECPAT UK led a campaign for extra-territorial legislation, a specific set of laws that hold citizens of a country accountable for offences committed abroad. This successful campaign resulted in the adoption of the UK Sex Offenders Act of 1997. Since that day, UK citizens that sexually exploit children outside the UK can no longer evade prosecution. The Sex Offenders Act resulted in countless successful convictions of offenders and has inspired the passing of similar laws in other countries. To this day, ECPAT International advocates in many parts of the world for such legislation to be passed.

Launched in April 1998, ‘The Code of Conduct for the Protection of Children from Sexual Exploitation in Travel and Tourism’, The Code, was created by ECPAT Sweden with help from tourism companies in Sweden and the World Tourism Organization (UNWTO). This effort was one of the earliest attempts at involving travel and tourism companies to actively participate in child protection. Today, The Code and ECPAT Sweden’s leadership has inspired organisations and the private sector to invest in making sure the travel and tourism industry appropriately addresses child sexual exploitation in 56 countries.

Since the launch of an e-learning platform in 2013, more than 1 million tourism professionals have been trained in spotting situations of sexual exploitation. And every year, dozens of cases are identified and reported around the world.

*ECPAT avoids terms that might harm or trivialise the sexual abuse of children. The phrase’ sex tourism’ should instead say ‘sexual exploitation of children in travel and tourism’, however, the poster predates the

for the Protection of Children from Sexual Exploitation and Sexual Abuse. 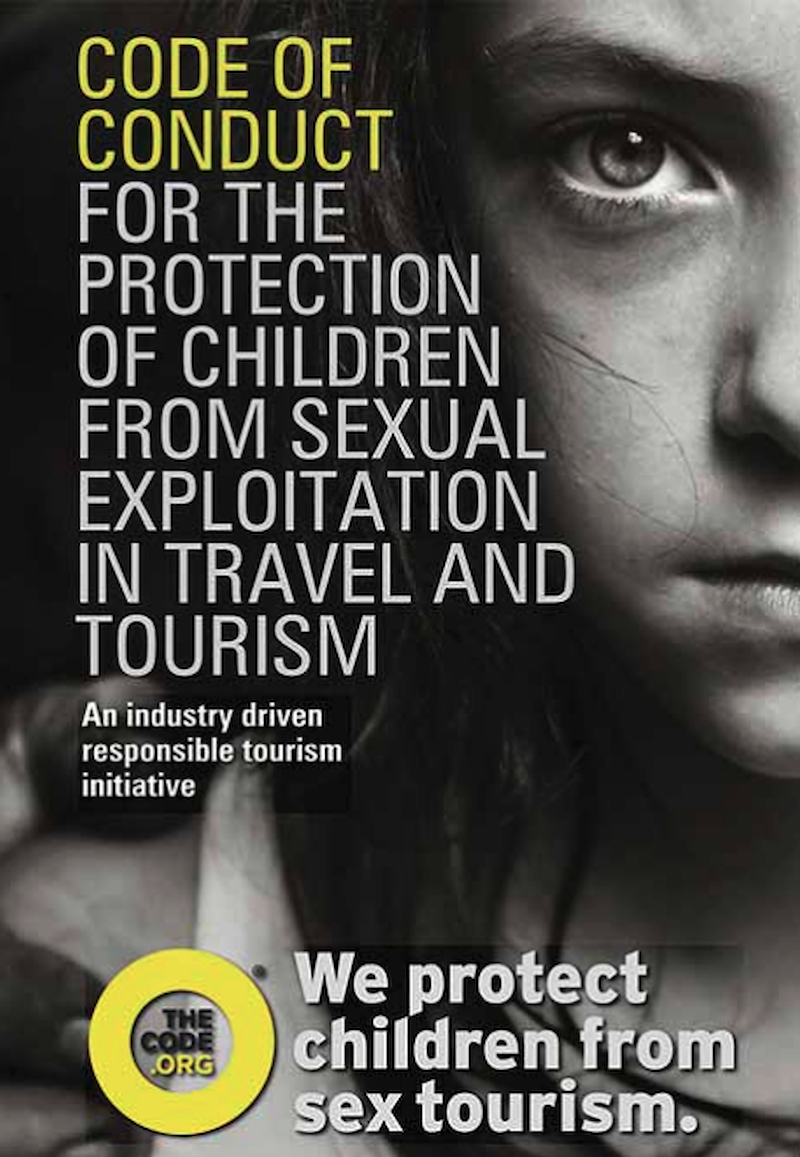 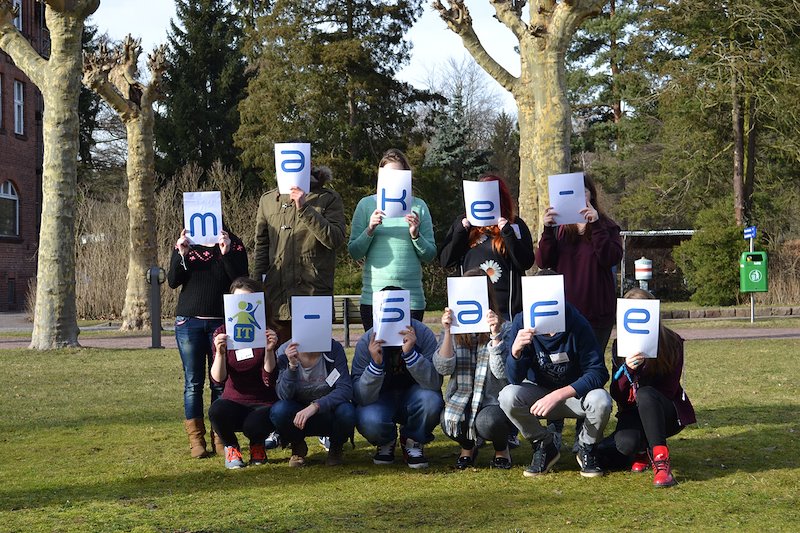 In 2005, ECPAT International launched the global ‘Make IT Safe’ campaign to spread awareness on the dangers children can face on the internet. Learning from ‘Make IT Safe”, Beyond Borders – ECPAT Canada became a founding partner of the Canadian reporting hotline for cases of online sexual abuse. Reports to the hotline have led to the rescue of children and to hundreds of offenders arrested.

“I remember the first ECPAT meeting I attended and it was incredibly inspiring.” 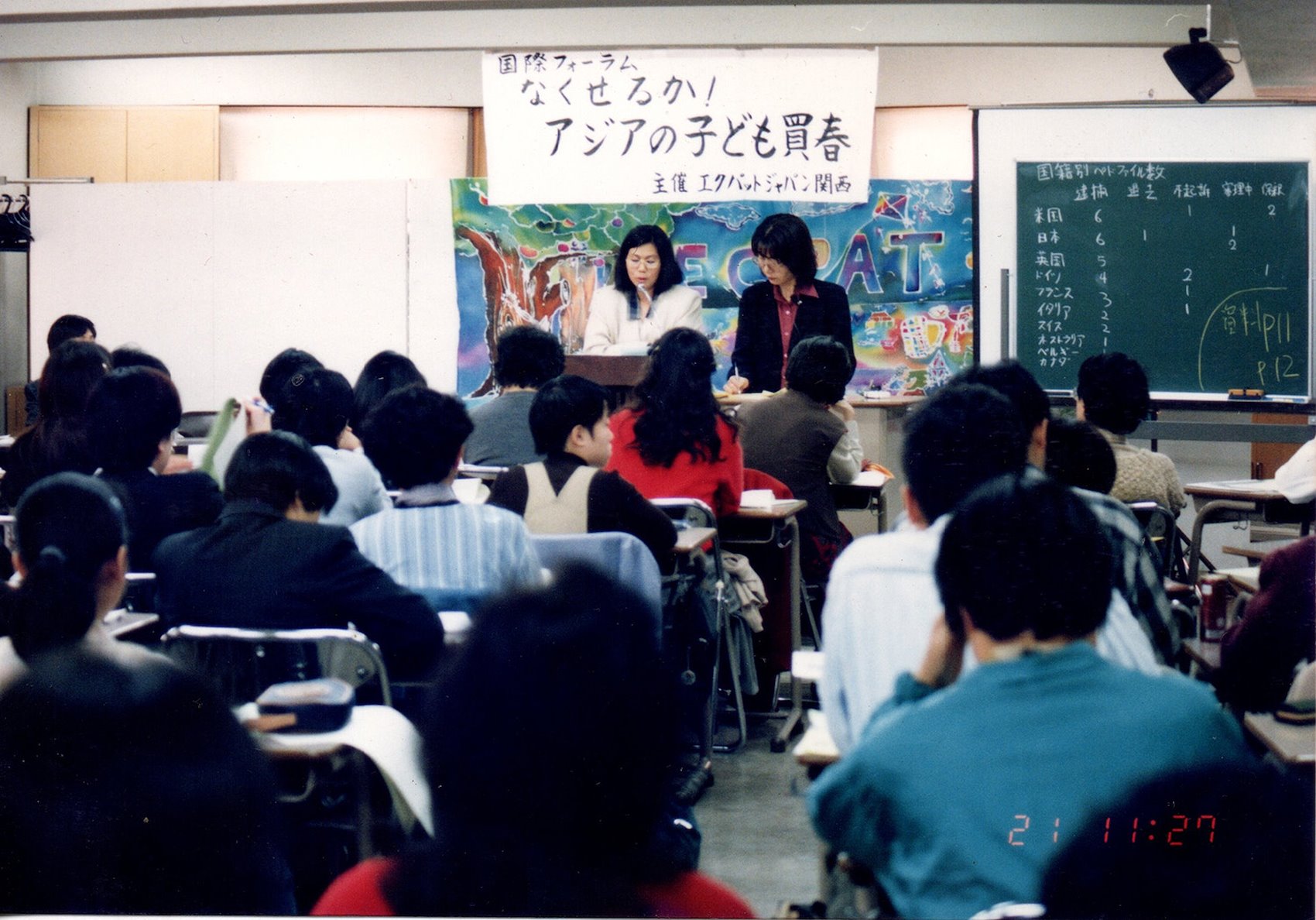 Already in the late 1990s, ECPAT International got involved with addressing the sexual exploitation of children online. In 1999, ECPAT Taiwan created a website and computer game titled “Online Abuse and Online Safety” aimed at teaching children how to safely use the internet. Once installed via CD, the program featured cartoon characters ’E-Baby’, ‘E-Girl’ and ‘E-Mouse’ that would automatically appear and instruct children how to use the internet safely. The game was distributed to elementary schools across Taiwan.

I remember the first ECPAT meeting I attended and it was incredibly inspiring. By that time, we had already been combatting sexual exploitation for 10 years and we felt that we were alone and that nobody else was working on the issue. However, coming to Bangkok and seeing that many people were working with the same passion, purpose and goals was very motivating—it was the perfect opportunity to learn from others and adopt a new and global perspective of the fight against sexual exploitation of children.

2000s: Growing Into the New Millennium

Moving into the 2000s, with a decade of work under our belt, our members continued to strengthen their response and grow their scope of work to better address the ever-evolving crime and new manifestations of child sexual exploitation.

The fight against the sexual exploitation of children in travel and tourism saw slow change. However, we saw an improvement in 2008 after signing with The Code. The value of being part of the ECPAT network really became apparent when we were able to organise conferences to highlight these problems with the support of tourism companies and ECPAT Germany. Many stakeholders from the industry attended and significant improvements were made to help stop child sex offenders travelling into Dominican Republic.

In 2009, ECPAT Philippines organised ‘Pass the Bill: the Roadshow against child pornography’, a public march aimed at spreading awareness of the growing problem of online child sexual exploitation and abuse in the Philippines. The rally was also intended to get legislators to pass the ‘Anti Child Pornography Act 2009’, one of the earliest laws specifically focusing on the online implications in child sex offences in the country. The event turned out to be very successful as it sparked a process that led to Philippine legislators passing this law which since provides the legal foundation to prosecute online child sexual exploitation. 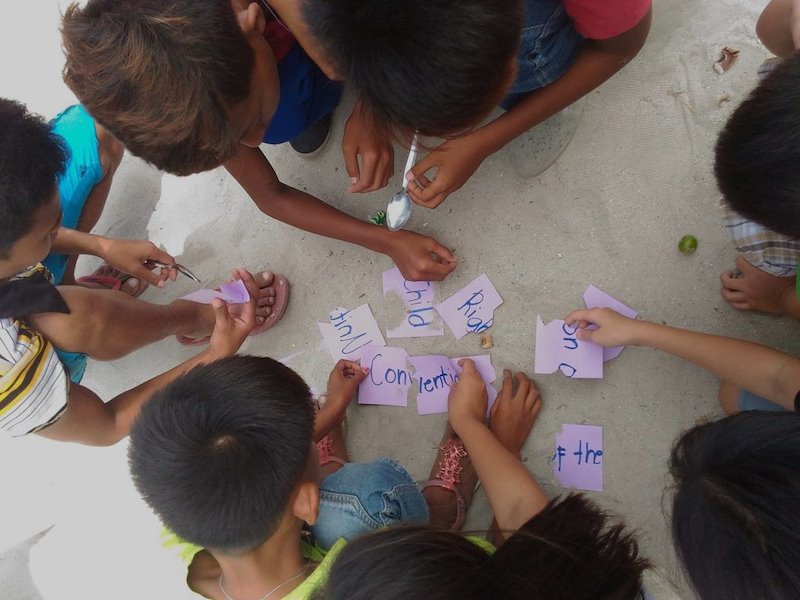 “We saw an improvement in the fight against sexual exploitation of children in travel and tourism after signing with The Code.” 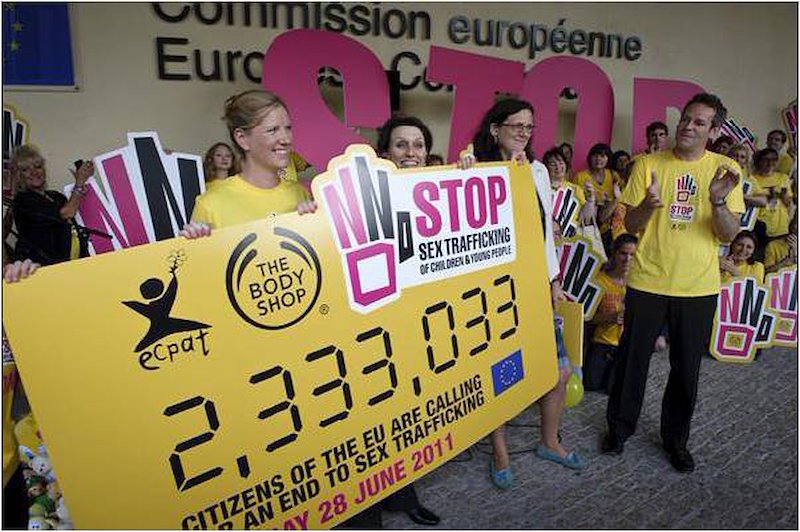 From 2009 until 2012, the ECPAT network ran a successful global campaign in partnership with The Body Shop called ‘STOP! Sex Trafficking’ . The campaign aimed at increasing public awareness of child trafficking and the sexual exploitation of children. ECPAT Australia noted that over a quarter-million Australians had learned more about child sex trafficking thanks to the campaign.

By 2012, Maiti Nepal, ECPAT member in the country, was housing 500 child survivors of trafficking and sexual exploitation, as well as managing hospices, transit homes and high schools that were providing support and recovery. 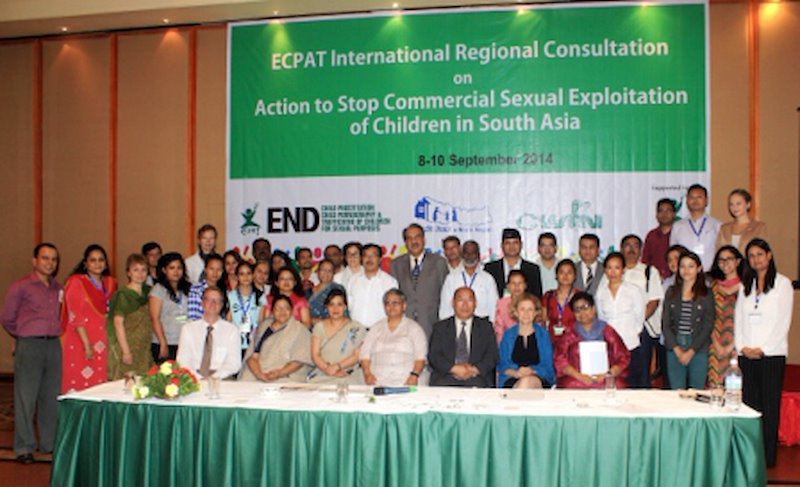 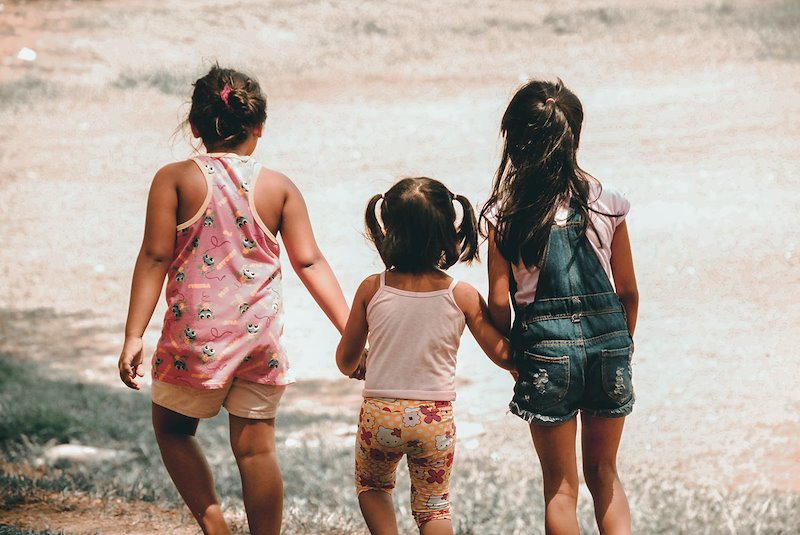 In early 2019, ECPAT International was notified by ECPAT member MAITI Nepal, that four Nepali girls were trafficked and forced into posing as dancers in Malawi. As the secretariat, we connected multiple ECPAT members who then worked closely together to plan a rescue operation for the girls.

Two ECPAT members in Malawi, Youth Net and Counselling (YONECO) and Eye of the Child were able to identify the girls and support the rescue operation. In cooperation with the authorities in Malawi, the girls were successfully repatriated to Nepal, where they received support to process their experience from MAITI Nepal. The traffickers were arrested and sent to court.

One of our most important achievements was our contribution to the South Asia Regional Training on Online Child Sexual Exploitation held in New Delhi, 2017. The event brought together ECPAT network members from the region with international experts and provided opportunities for an interface between CSOs, leaders, and law enforcement agencies. It reinforced the importance of mutual cooperation and assistance in preventing sexual violence online and promoted a child-friendly protective environment in the region. It showed us why being a member of such a strong network is so incredibly important and rewarding.

Here are a few words from some of our member organisations, on how they see ECPAT in another 30 years: 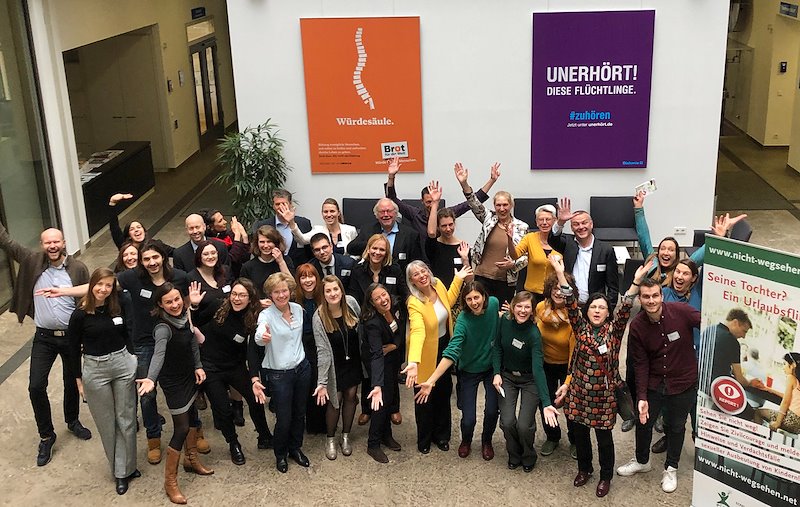 In an ideal world, in 30 years, there would no longer be a need for the ECPAT network. We’d like to see greater survivor-led work to tackle child exploitation in all of its forms, with increased protection for victims as well as international efforts to eradicate the root causes of this issue—namely social and economic inequality, gender discrimination and inadequate child protection structures.

We express our most sincere admiration for overcoming challenges and difficulties over the years. ECPAT always stands firm and remains a pioneer in the fight against the sexual exploitation of children. I wish we could congratulate ECPAT in 30 years period about the end of the sexual exploitation of children. However, due to the uncertain future, we hope to continue seeing ECPAT working tirelessly in support of children and their well-being.

[In 30 years] the network will have a presence in all countries of the world and we are the leading global organisation for all stakeholders—not only civil society organisations but the private sector. 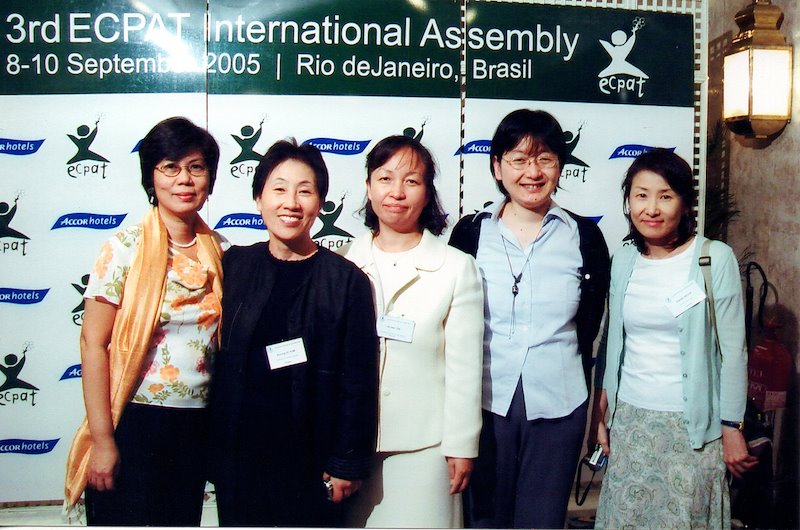 “Happy anniversary to everyone who is part of ECPAT and shares the same objective: a world with no sexual exploitation of children, where we can all live with dignity and freedom.” 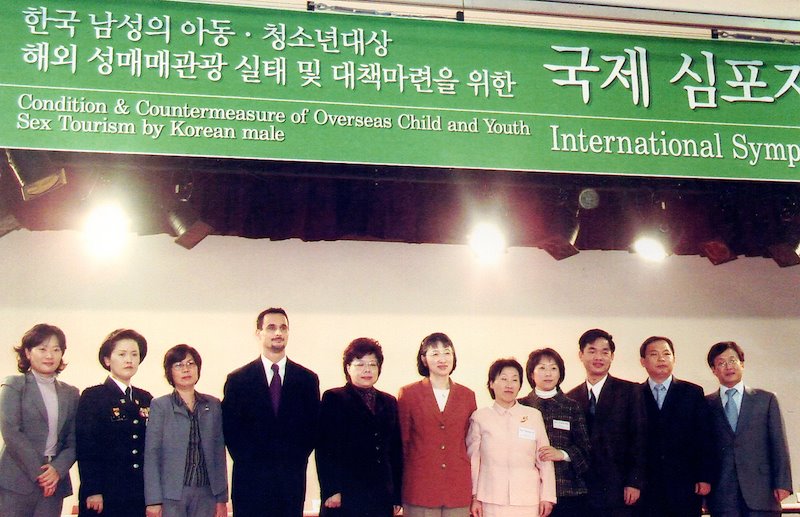 Ideally speaking, it would be best if in 30 years from now there is no child sexual exploitation anymore and the ECPAT network is no longer needed . Unfortunately we all know that such a wish is like asking for utopia. So my second wish for the ECPAT network is to be the most recognised and popular child protection network internationally.

We thank our members for making our first 30 years so memorable. The true essence of ECPAT is its network and the many remarkable and committed individuals representing them. It is thanks to their efforts, that we made significant collective progress and brought sexual crimes against children to the attention of the world. It is also thanks to their commitment that we all can continue to do our best to prevent this crime from affecting the lives of so many children worldwide. It is through the inspiration of all of our members that we are hopeful that in the future, their wishes for a world free from child sexual exploitation can become a reality. 🌟