Desperate Families in Nepal Married off their Children

ECPAT International is releasing a new research briefing paper on the sexual exploitation of children in Nepal. This article highlights some of the most pressing risks presented in the paper, including weak laws on online exploitation, slow economic development and recovery from the 2015 earthquakes, and risks from the rising trend of ‘voluntourism’.

To understand the situation we drew information from the Economist’s Out of the Shadows Index which looks at the government’s response to fighting sexual exploitation of children, and the ECPAT Country Overview report on Nepal. In the Index, Nepal scored 46.4/100 meaning there is plenty of work needed to improve the national response.

Nepal has an adequately stable environment, scoring 71/100 for the instability indicator in the Out of the Shadows Index. However, the 10-year long civil war (1996 to 2006) and the 2015 catastrophic earthquakes left an imprint of economic hardship on Nepal.

These events resulted in poverty, migration and slow economic development, which can exacerbate risks of child sexual exploitation. However, Nepal has made progress in reducing poverty over the years, and in 2019, the estimated gross domestic product growth – a measure that can indicate economic progress – was a high 7.1%. 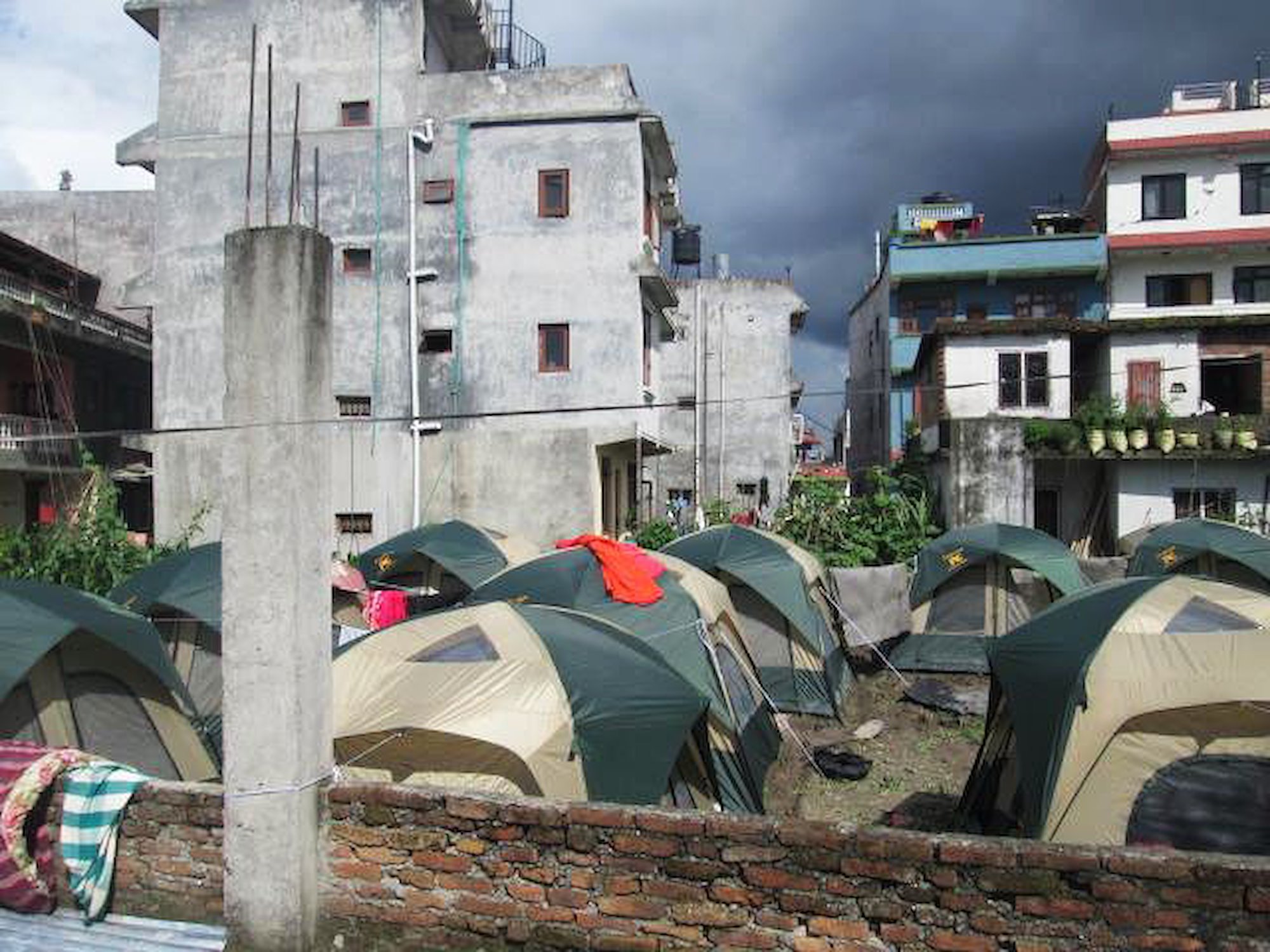 Nepalese children are still impacted by the consequences of the civil war and the earthquakes, that can exacerbate risks of sexual exploitation.

Natural disasters can be a magnifier for sexual violence including trafficking and sexual exploitation of children.

Nepal has one of the lowest scores – 25 out of 100 – on social vulnerability to natural disasters when it comes to sexual abuse and exploitation.

After the 2015 earthquakes, Nepal’s government, in collaboration with international and local organisations, made efforts to prevent children from being trafficked and unnecessarily placed in care homes. They introduced both checkpoints and police centres in earthquake-affected districts, as well as border interception points and banning children from travelling without guardians.

Child Marriages – a Way to Survive After The 2015 Earthquakes

An example of increased vulnerability for children can been seen in the phenomenon of child, early and forced marriages. It is closely linked to gender inequalities and social norms and in times of crisis, desperate families can marry off dependent girls as a way of coping with economic hardship. It can also be seen as a way of preventing sexual violence as girls without husbands are viewed as ‘unprotected’ or ‘vulnerable’.

Nepal has the 17th highest rate of child marriages in the world.

As of 2019, Nepal has the 17th highest rate of child marriage in the world—a phenomenon found by researchers and practitioners to be exacerbated by the 2015 earthquakes.

Nepal scored 67/100 for the Index’s indicator on societal attitudes towards sex, sexuality and gender and 52/100 for the indicator on social protections provided to children. Both play a critical role in protecting children from sexual abuse and exploitation. For example, social norms that de-value girls and women, or consider them only as a ‘burden’ on the family maintain harmful gender discrimination in the country.

Inequalities, caste and poverty increase the risk of sexual exploitation. 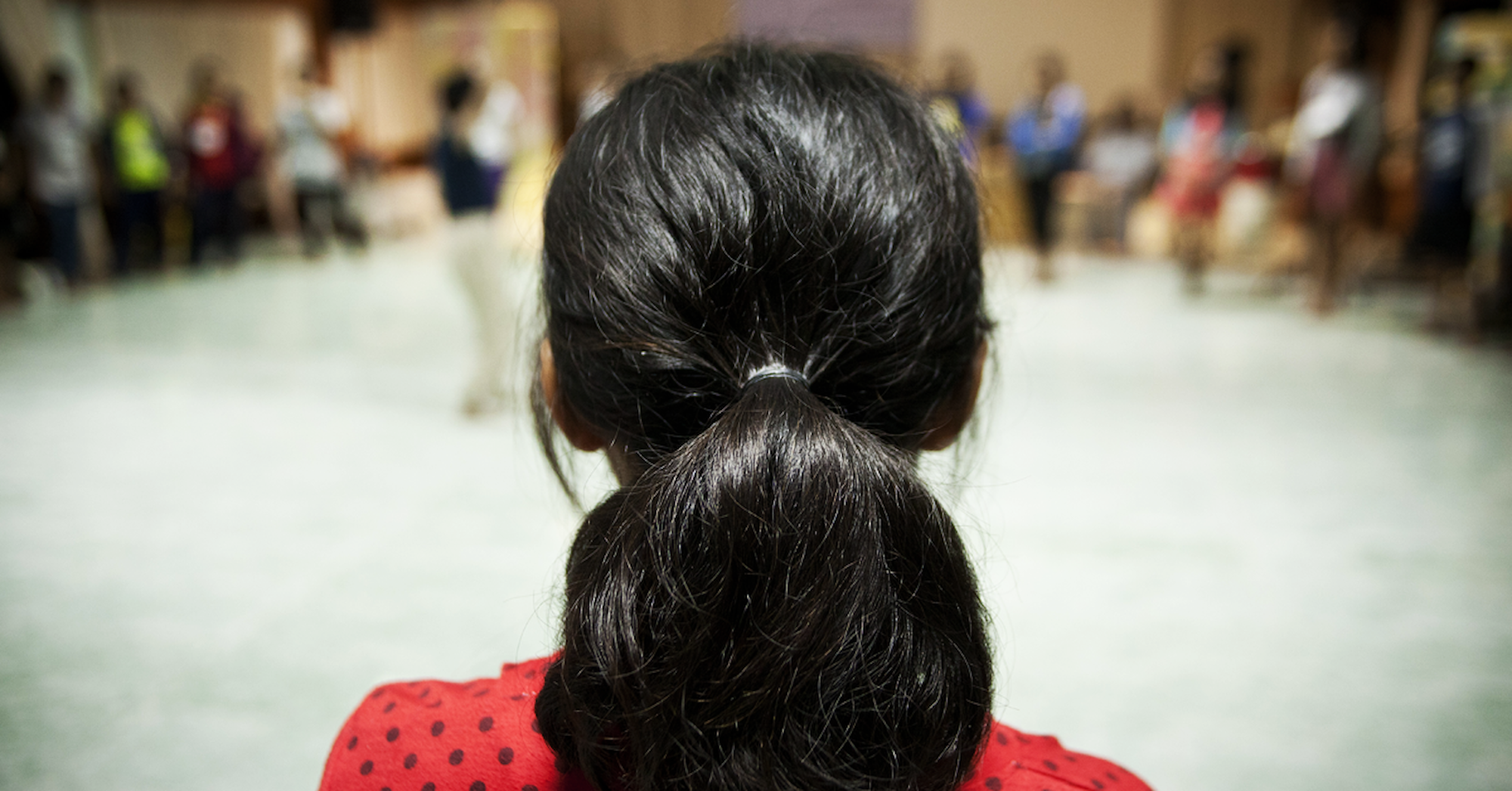 Similarly, indigenous groups and low caste communities are politically, socially, economically and culturally marginalised, making them highly susceptible to various forms of sexual violence, including exploitation. Discrimination based on caste and gender is further exacerbated by poverty.

Sexual Exploitation in the Entertainment Sector

To escape poverty and discrimination, many Nepalese children take jobs in the entertainment sector – an environment where they are highly vulnerable to sexual exploitation.

Over 60% of the 270 child workers surveyed were exposed to flirting, groping, performing sexual massages and engaging in sexual acts.

In 2019, 600 young people (270 children) working in Kathmandu’s entertainment sector, were asked about their experiences. The survey found that:

The efforts of Nepalese civil society in preventing exploitation, raising awareness and providing support to child victims of sexual exploitation are praiseworthy. Most rehabilitation centres and the toll-free child helpline are run by NGOs. The helpline is available in 12 districts and provides a wide range of services including rescue, relief and support, psychological counselling and rehabilitation.

Local organisations are running rehabilitation centres across the country.

‘Voluntourism’ is Putting Children At Risk

The 2016 Global Study on the Sexual Exploitation of Children in Travel and Tourism identified that sexual exploitation of children was becoming visible in emerging tourism destinations such as Nepal. Recent reports on cases of child sex abuse and exploitation happening in orphanages by foreign volunteers demonstrate that this is a pressing issue faced by Nepalese children.

Volunteers should always be required to undergo international police clearance and they should never work directly with children.

Travel and Tourism Businesses Must Step Up

Nepal had an estimated 1,173,072 international tourist arrivals in 2018 – a 25% increase compared to 2017. With these numbers, it would be expected that Nepalese children are at risk of sexual exploitation in this context. Yet no data exists. 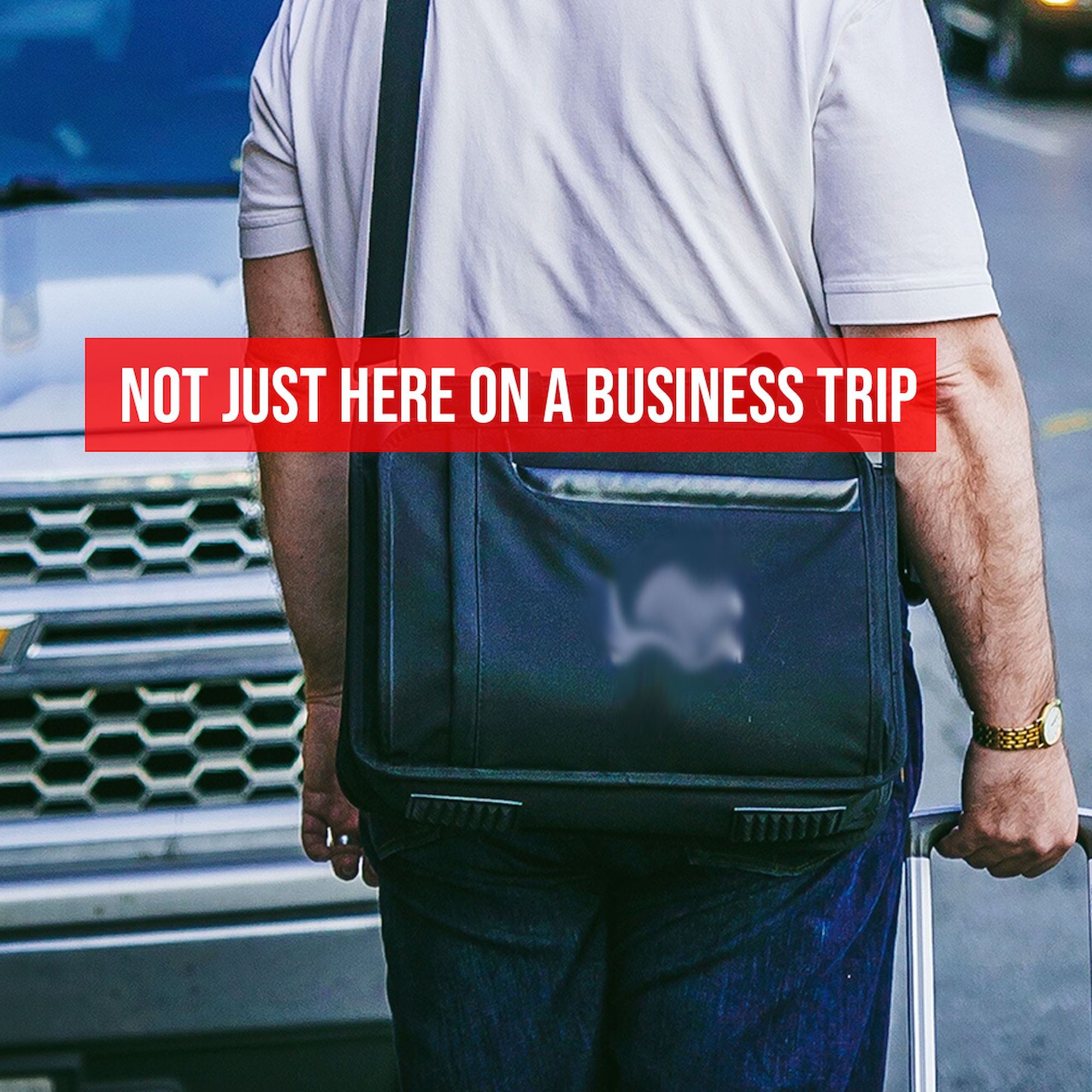 Also, Nepalese travel and tourism businesses scored 0/100 due to an overall omission to include child protection as clear priority in their work, annual reports and organisational codes of conduct. They did however score 100/100 for having four local and 17 international companies sign the Code of Conduct to Protect Children in Travel and Tourism, which trains professionals in recognising and responding to cases of child sexual abuse and exploitation.

We need your support – Donate!

Nepal has scored 55/100 on the Out of the Shadows Index’s indicator on Legal Frameworks. The country has ratified the main international agreement against sexual exploitation of children, as well as a number of international and regional frameworks. To live up to their commitments, numerous laws on domestic violence, child sexual exploitation and human trafficking have been amended.

However, limitations still exist. For example, boys are not protected within current rape laws, some online sexual offences against children are not criminalised and trafficking legislation has major loopholes.

75% of children surveyed did not know how to protect themselves from online sexual exploitation.

The Penal Code criminalises ‘producing or selling obscene books [and] pamphlets’, which may be used to cover also the production, sharing and viewing of child sexual abuse material. The newer Child Act from 2018 defines explicitly child sexual abuse material and prohibits some related offences. However, it also falls short of international standards as defined by the United Nations Optional Protocol on the Sale of Children, Child Pornography and Child Prostitution*, as it only includes visual materials and not, for example, audio, written or illustration. 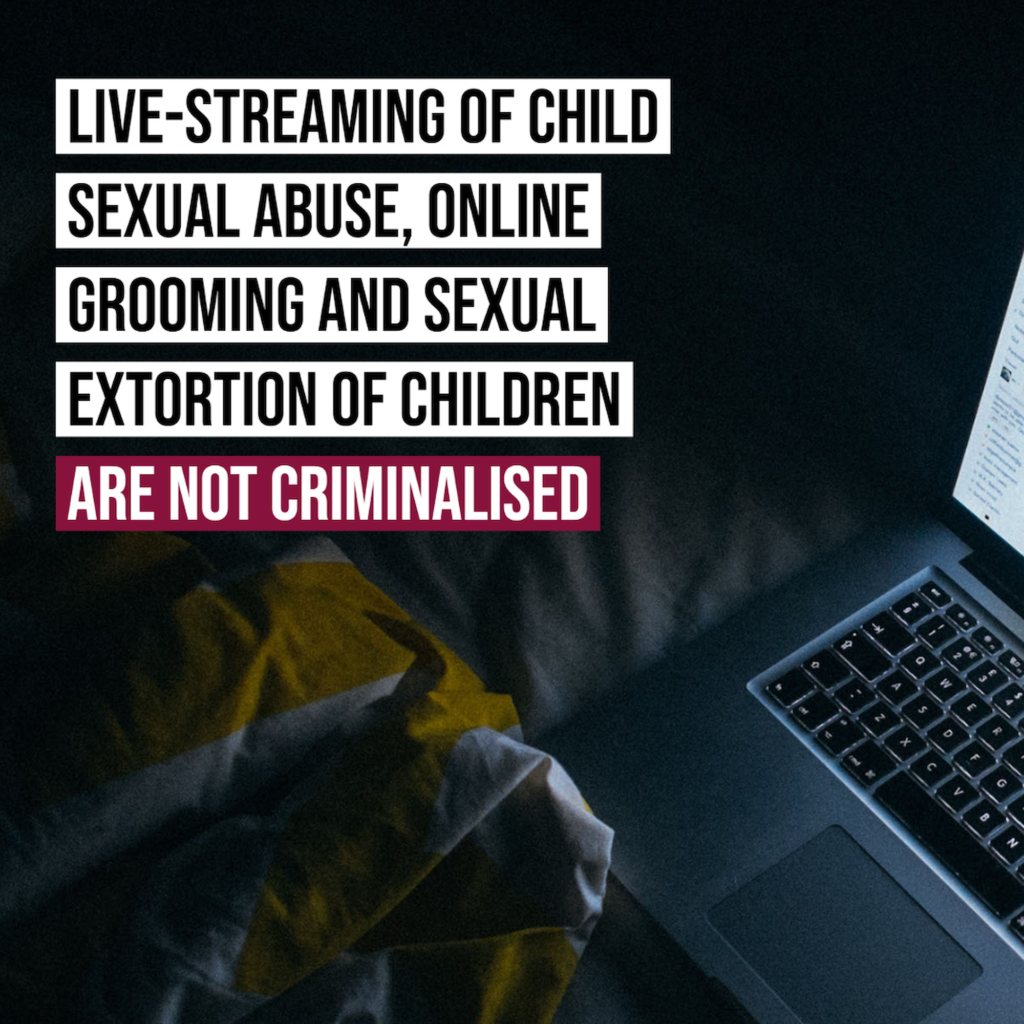 In Nepal, online live-streaming of child sexual abuse, online grooming and unwanted sexting or sexual extortion are not criminalised. Nepal also does not mandate Internet Service Providers to report child sexual abuse material that is hosted on their servers. These loopholes explain the score of 0/100 in the Index’s indicator for online grooming and 33/100 for Internet protections.

‘Children Can Never Consent to Their Own Exploitation’

Nepal has not yet ratified the UN Protocol to Prevent, Suppress and Punish Trafficking in Persons, Especially Women and Children (Palermo Protocol). The Human Trafficking and Transportation (Control) Act (HTTCA), enacted in 2007, is the framework to protect children from trafficking in the country. The act covers sexual exploitation in prostitution as well as many aspects of the movement of a person for exploitative purposes.

Although the HTTCA suggests harsher penalties when the victim is a child, it fails to capture the most important aspect of the Palermo Protocol:

The HTTCA does not differentiate adults from children in the description of the crime, which means that it also does not outline that a child can never consent to being exploited. In practice, this means that a child who is trafficked for sexual purposes through coercion can be seen as voluntary engaging in their own exploitation, and would therefore not be rightfully protected.

Nepal is developing a National Action Plan based on the South Asian Initiative to End Violence Against Children’s regional plan to end child sexual abuse and exploitation, including online. A meeting to review the draft took place in February 2019, but there is no public information about the launch of a final plan. At present, Nepal has a number of policies and frameworks related to children that partially address the issue of sexual exploitation.

Services and support for victims needs to be expanded

Nepal is working towards ensuring the child victim’s right to recovery and reintegration in society, using provisions such as the UN Convention on the Rights of the Child and its Optional Protocol on the Sale of Children, Child Prostitution and Child Pornography* as standards. The government has made a number of positive steps forward, such as:

The rehabilitation fund is partially supported by the government budget and through fines collected from convicted perpetrators of trafficking. It is handled at the central and district levels and supports anti-human trafficking programmes and campaigns, the rescue of victims, repatriation and rehabilitation and psychosocial counselling to name a few. The fund is also used for the operation of rehabilitation centres for victims of trafficking in Nepal.

Lack of Services for Victims of Other Forms of Exploitation

While some support services and the toll-free child helpline are easily accessible, there are limited services for victims of child sexual exploitation other than trafficking, especially for victims of online exploitation. An analysis of the budget allocations for these services and centres shows that male victims are largely overlooked.

* ECPAT does not use terms such as ‘child pornography’ or ‘child prostitution’ if not a part of an official title.

Guidelines on terminology can be found here.

Support the work of ECPAT – Donate!

Nepal’s Ranking at a Glance

Nepal’s position on the lower end of the ranking, is partially explained by the uncoordinated national policy framework that includes loopholes and inconsistencies which hampers the efforts to tackle this crime.