A Moment to Mark, Remember and Celebrate but Not a Time to Rest

As ECPAT reaches 30 years on the 5th of May 2020, the reality is that the end of the sexual exploitation of children remains unfinished business. This year certainly marks a major milestone in ECPAT’s history and provides a moment to remember and to celebrate. However, this is not a time to rest. As ECPAT enters a new chapter of our history, we are reminded of the determination of our founders and the incredible power of collective action all across the globe.

This is the story of ECPAT International.

Back Where It All Started

During the 20 year-long Vietnam War, the Philippines hosted a major US military base. Thailand was the nearest country to Vietnam and there, as well as in other countries in the region, middlemen profited from supplying local women to meet demand from foreign soldiers. But when the war ended and the soldiers left, another set of visitors started arriving. In the US, Europe, Japan and Australia, tour operators began selling travel experiences to the region. Places like Pattaya in Thailand, and other parts of Southeast Asia quickly became known as the ‘sex capital’ of the world.

Five girls were found chained to their beds when a house burned down in Phuket in 1984.

Concern with the social impact of tourism grew as cases of sexual exploitation and abuse came to light. In Sri Lanka, the sexual exploitation of impoverished ‘beach boys’ became the face of the booming tourism industry of the 1980s. In 1984, a fire broke out in a brothel in Phuket, Thailand. In the basement, firemen found the charred bodies of five girls, between nine and twelve years old, chained to their beds. 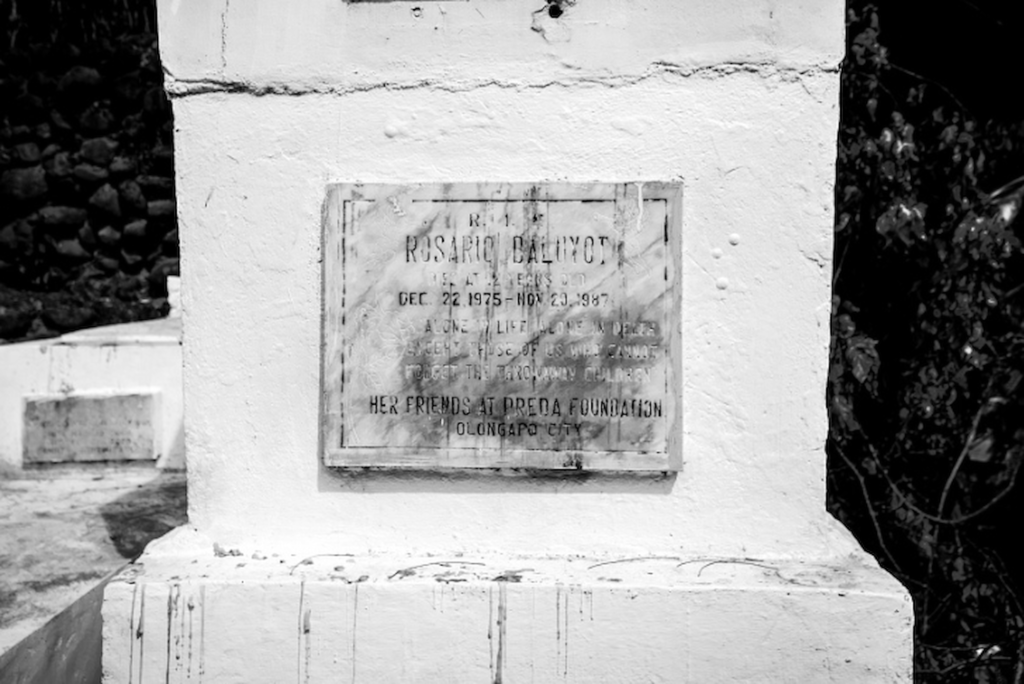 The grave of Rosario Baluyot in the Philippines | Photo: AnaMaria Bruni

At a tourism fair in 1990, a man named Ron O’Grady learned that tourists were increasingly arriving in Asian countries for the purpose of sexually exploiting children. Foreign visitors were even establishing small colonies to engage in child sex abuse, and child brothels were sprouting up. Dismayed and disgusted over the increasing frequency and brutality of the horrible cases such as Rosario’s, Ron and his fellow activists gathered in Chiang Mai in May 1990. A few months later, in August the same year, the campaign to End Child Prostitution in Asian Tourism, ECPAT, was officially launched. 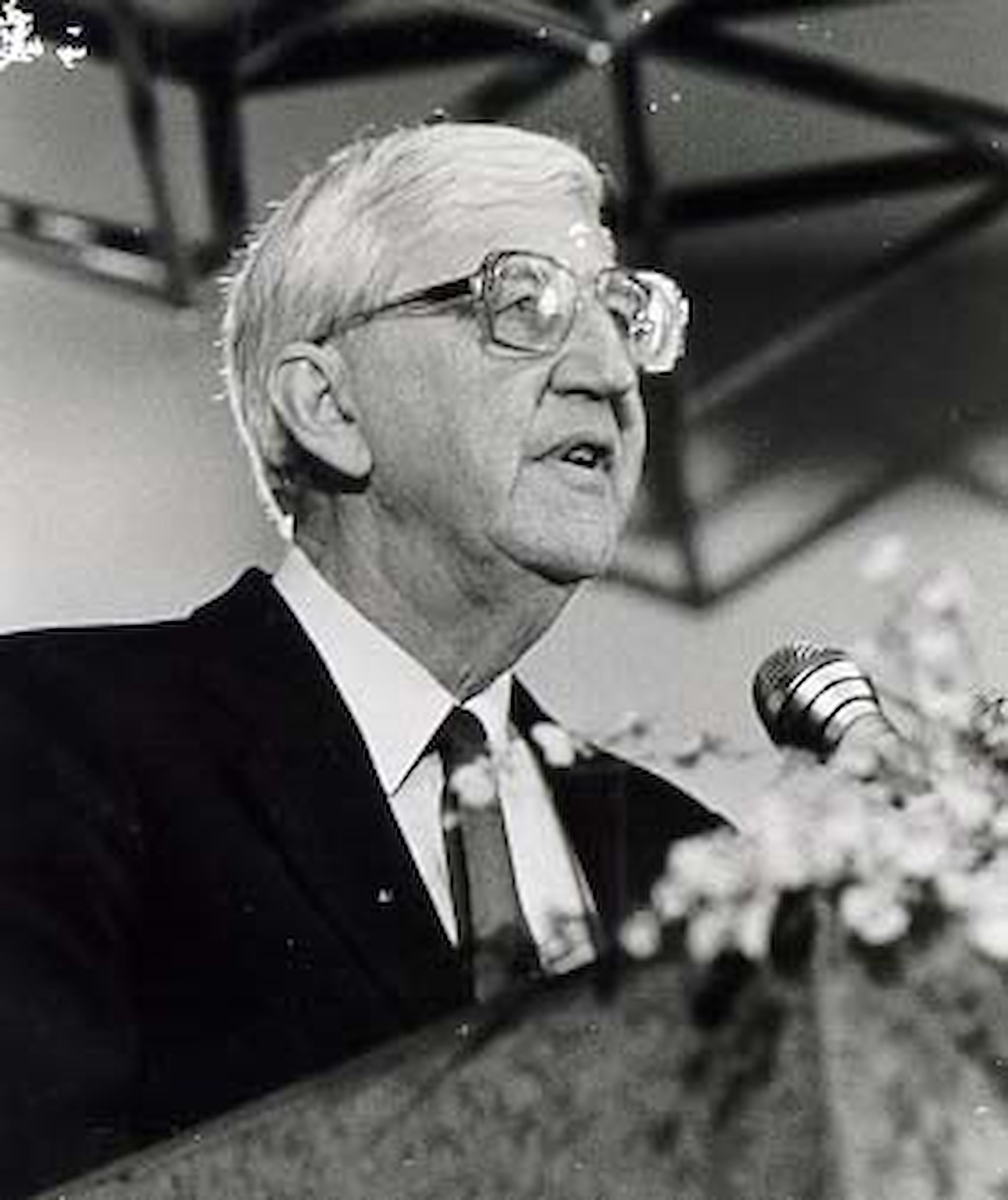 The prostituted child does not enter into the relationship by choice. It is a contractual arrangement in which the child is simply the commodity available for hire. After the price is fixed and paid, the child is used by the customer to meet the customer’s own needs and then referred to the “owner” of the child. The child is probably given no more respect than a rental car.

Rescuing Children by Raiding Brothels in the 1990s

From early on, ECPAT has gotten involved in cases requiring immediate action. In 1993, ECPAT International received information that young girls were being abducted from Myanmar and trafficked to the port town of Ranong in Thailand. As a response, we contacted the police and travelled to Ranong with a team of 35 police officers to raid the brothels where the trafficked girls were being held. That day, 104 women and 40 girls were rescued from a situation where they were continuously sexually exploited by local seamen and repatriated to their families.

ECPAT members around the world continue to be involved in such operations to ensure child-safeguarding standards are applied by law enforcement when dealing with child victims. In 2019, a joint effort from our network partners in Malawi and Nepal led to the rescue of four Nepali girls who were trafficked and forced into posing as dancers in Malawi. 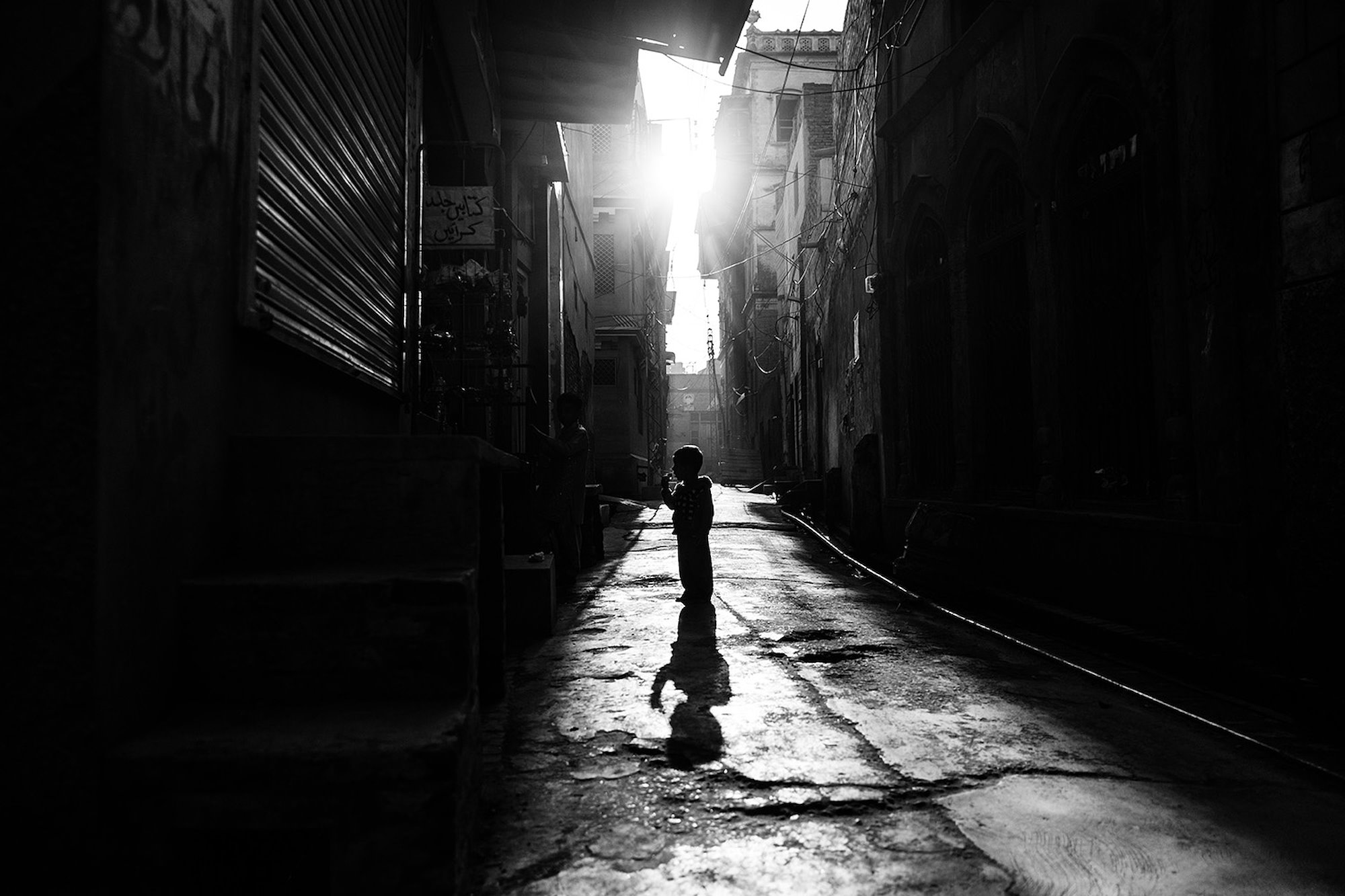 The Fight Against Child Sexual Exploitation— a Global Issue

As years passed, the ECPAT campaign continued, finding new ways and collaborations to combat the crime of child sexual exploitation. As ECPAT members increasingly took on responsibilities in other countries and collaborated with organisations globally, the campaign gradually expanded around the world to not only include Southeast Asia, but the rest of the world. At first, the ECPAT campaign was extended to 1993, then to 1996, and in 2001 ECPAT officially transformed into an International NGO with a growing network of member organisations globally. 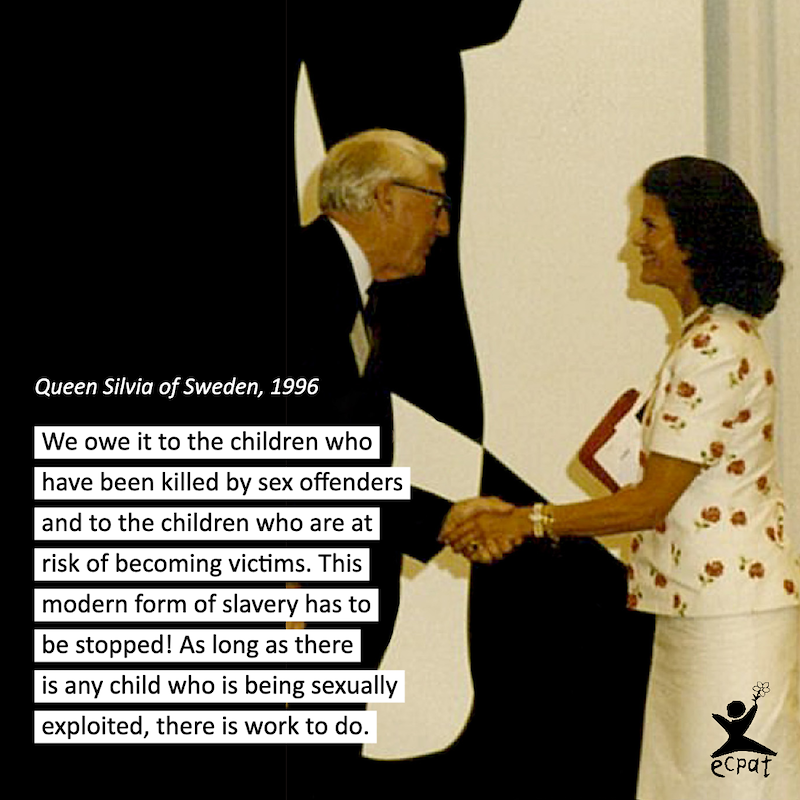 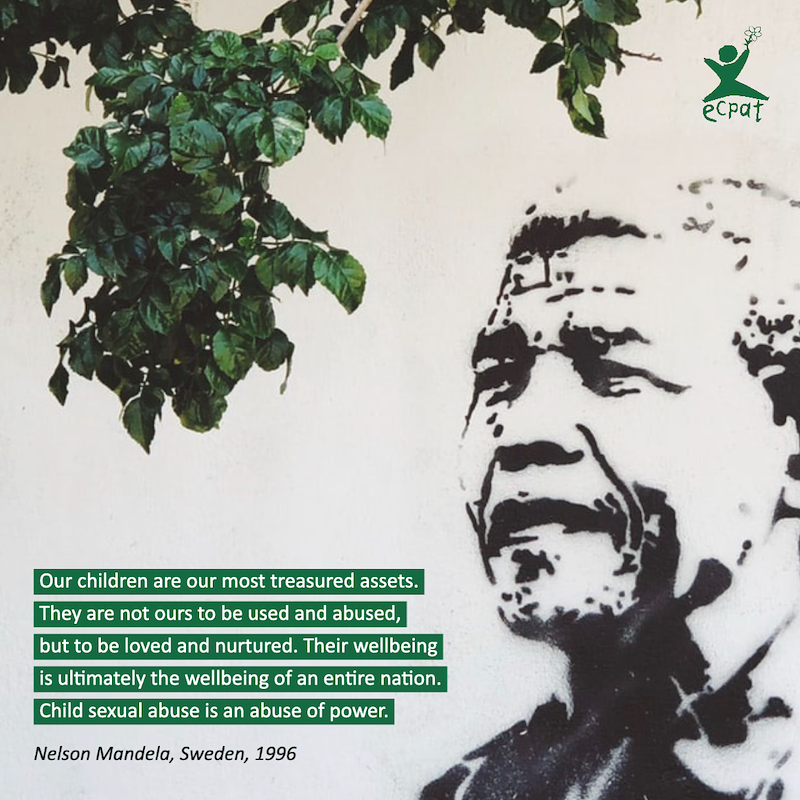 First World Congress on the Sexual Exploitation of Children in Stockholm, Sweden, 1996.

ECPAT Gathered Leaders of The World in Stockholm

ECPAT firmly believes that collaboration is key in fighting the sexual exploitation of children. Over the years, the ECPAT network has gathered governments, activists, businesses, civil society organisations and royalties across the world together at three World Congresses. The first World Congress took place in Stockholm, Sweden in 1996.

“If there were no demand, it would not be commercially viable to have a supply. This is a simple fact. If there is anyone around you that is helping to create a demand, then take courage and speak out.”

The Stockholm Congress was followed by Yokohama, Japan in 2001, and in Rio, Brazil in 2008. These congresses were extremely important in catalysing a global response to this global issue.

A Code of Conduct to Protect Children from Travelling Offenders

For a long time, ECPAT members had been trying to find a way to stop the sexual exploitation of children by traveling child sex offenders. Following the first World Congress, it was clear that action was needed at much higher level, and on a bigger scale. In 1996, ECPAT Sweden, in partnership with the United Nations World Tourism Organisation, UNWTO, and several Swedish tour operators, initiated a code of conduct—a set of suggestions and standards guiding businesses in the travel and tourism sector on how they could help protect children. Companies were asked to join the movement and implement these measures within their daily operations. 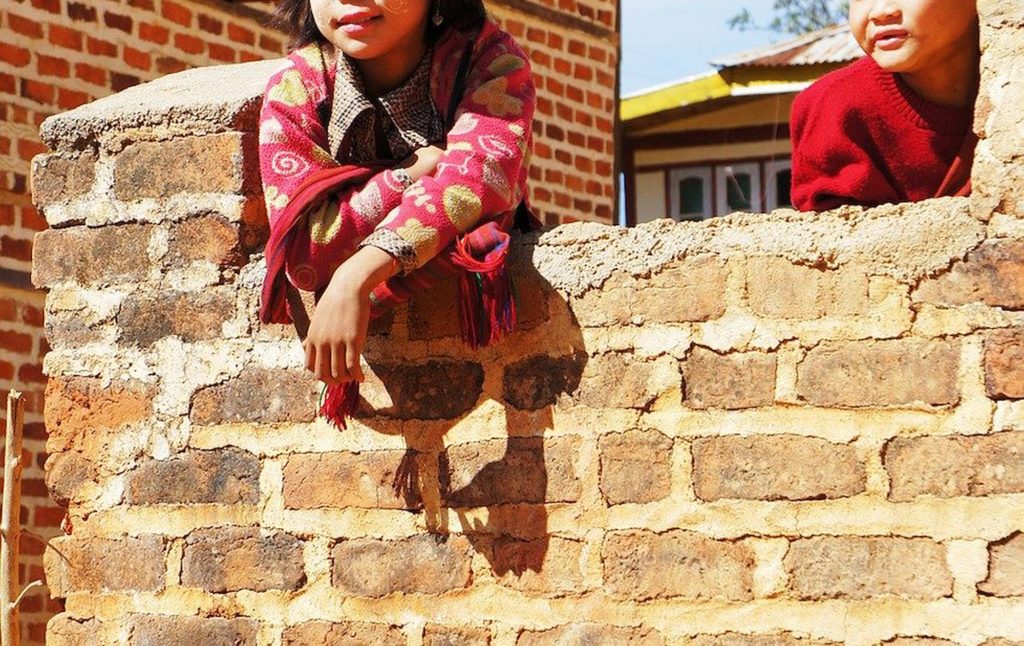 The Code has over 350 member companies from across the world, including some of the biggest hotel chains, tour operators and airlines, and many ECPAT members working on the ground to support these companies in their child protection measures.

Today, ECPAT International has a close collaboration with organisations such as the World Travel and Tourism Council and the Global Sustainable Tourism Council, to further raise awareness on the need for child protection within the travel and tourism industry.

Learn more about the sexual exploitation of children in travel and tourism from our global research.

Age of the Internet: Online Child Sexual Exploitation on The Rise

The online environment had a major impact on ECPAT’s work and its mission. The development of new communication technologies and the proliferation of the internet have been quickly utilised by child sex offenders, who almost overnight could get access to and sexually exploit children from their own homes. In 1996, three American men were jailed after producing and sharing images and videos of the sexual abuse of children online. They shared these images with other ‘club members’ in the US, Australia, Canada and Finland.

“Members joined by invite only, on condition that they provided 10,000 images of children different from the hundreds of thousands of others already stored on the club’s database. One Italian member had 180,000 images.”

This case, called The Orchid Club, was one of the first official cases involving real-time online sharing of child sexual abuse material, but for ECPAT International it did not come as a surprise. We had already joined forces with Interpol to explore the possibilities of this very scenario, and together we wrote a paper stressing the lack of a uniform definition of ‘child pornography’ and the lack of data on the magnitude of the issue.

While girls still accounted for the biggest category of unidentified victims, 31.1% were boys. And when images or videos of child sexual abuse are depicting boys or very young children, the abuse is more likely to be severe.

By 1998, when the concerns about the Internet’s impact on child sexual exploitation had grown, among others, ECPAT and Interpol hosted an experts meeting to further explore this emerging manifestation of child sexual exploitation. This was the start of many years of hard work, and often, ECPAT led the advocacy efforts on online child sexual exploitation before anyone else was even talking about it. And 20 years after the first research collaboration with Interpol, we jointly released a ground-breaking report suggesting that when online images or videos of child sexual abuse depict boys or very young children, the abuse is more likely to be severe.

In the coming year, ECPAT International, Interpol and UNICEF – Innocenti will release the results of joint research on online child sexual exploitation across 14 countries in Asia and Africa. ECPAT is also working together with law enforcement, the tech industry, the UN and governments to tackle the issue through our role as Board member of the WeProtect Global Alliance.

Today, We Celebrate That…

As we leave 30 years of success and challenges behind, we are determined and ready to take on the challenges ahead. With 118 member organisations worldwide, we are strong and we will continue to do our very best to prevent child sexual exploitation from happening in the first place, and create safe havens for children escaping sexual abuse and exploitation.

It is our privilege and honour to thank everyone who has made this incredible journey possible. Thank you.