Ending the Silence on Child Sexual Exploitation: A Podcast Episode on She Leads 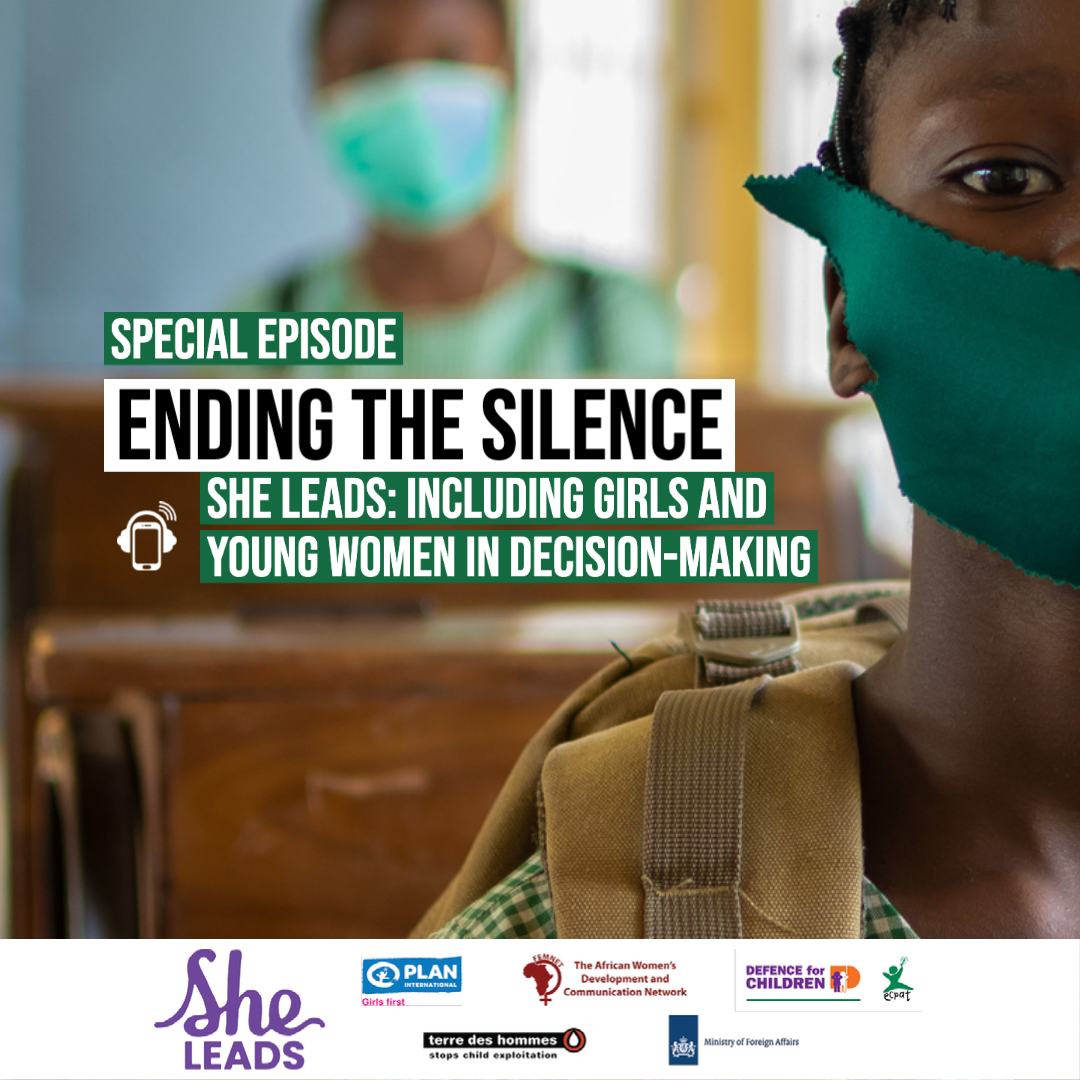 In our latest podcast episode we cover She Leads, a programme dedicated to amplifying the voices of girls and young women across Africa and the Middle East.

In our new podcast episode on a joint ECPAT, Plan International Netherlands, Defence for Children – ECPAT the Netherlands (DCI-ECPAT), African Women’s Development and Communication Network (FEMNET), and Terre des Hommes the Netherlands (TdH) programme called She Leads, we talk to Linda Barry, Willy Buloso, and Joy Katunge and find out why having equal access to health, education, economic participation, and political decision-making power prevents violence against women and girls.

Listen to episode one below:

Here are some highlights from that episode:

Can you give us some background on the She Leads project?

[She Leads] is a programme for and by girls and young women, which seeks to increase the influence of girls and young women on both decision-making and the transformation of gender norms in formal and informal institutions. We are in nine countries in Africa and the Middle East, namely Ghana, Liberia, Sierra Leone, Mali, Kenya, Ethiopia and Uganda, and Jordan and Lebanon. We also have regional programme components that target the African Union, the League of Arab States, as well as the United Nations in Geneva and in New York.

Out of all the projects currently based around gender in Africa and the Middle East, what makes She Leads so special?

She Leads is special in the context of Africa, where we live in a masculine society. She Leads in East and West Africa is bringing out the voices of girls by giving the power and the opportunity to young girls to advocate for themselves. We are changing the way society is working in these regions, and we are bringing girls at the centre of advocacy so they can advocate for their rights.

What are the roadblocks and challenges that women and young girls face in both formal and informal institutions?

Illiteracy is one. There’s limited or lack of access to education, and the girls end up having no technical skills, which has a domino effect, so they end up missing out on employment opportunities.

The last one is the negative social norms within the communities, which reflects all across countries where She Leads is being implemented. Patriarchy is deep-rooted, so you find that the social norms deeply affect women and girls, and they are not able to thrive and blossom and be the people that they’re destined to be.

Can you explain to a layperson why we need more gender parity in formal and informal institutions as well?

What some of the biggest challenges have been so far in your roles?

In both situations, it is very difficult to ensure girls’ and young women’s participation, because many girls from rural areas—and even non-rural areas—do not have access to computers or the internet, which means that they cannot participate.

Even now that the world is opening up, you see that when there are in-person meetings, very often girls and young women are not there, which makes their participation very, very difficult.

What does the success of this project look like for you?

I hope to see girls and young women making decisions, sitting in those places and positions of power, where they can make decisions that directly and positively affect them.

I also look forward to having transformed gender norms and acceptance of the positive gender norms that will have been instilled in the community within the girls themselves. Another thing that I hope to see is girls and young women meaningfully participating in decision-making, both at the county, national and societal levels, from formal to informal institutions.

ABOUT ‘ENDING THE SILENCE’

‘Ending the Silence’ is a podcast by ECPAT International, an organisation dedicated to ending the sexual exploitation of children. In the podcast, we explore what the key issues are, delve into global trends, and meet the experts, who are dedicating their lives to making the world a safer place for children. Click here to listen to all our episodes.

She Leads is a joint programme of Plan International Netherlands, Defence for Children – ECPAT the Netherlands (DCI-ECPAT), African Women’s Development and Communication Network (FEMNET), and Terre des Hommes the Netherlands (TdH). Equal Measures 2030 is a technical partner. The She Leads consortium brings together child rights organisations, feminist/women’s rights organisations, and GYW-led groups and aims to increase the sustained influence of girls and young women (GYW) on decision-making and the transformation of gender norms in formal and informal institutions