Can monitoring of persons convicted of child sexual offenses through registries keep our children safe? 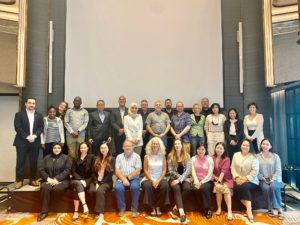 BANGKOK—35 participants from Australia, Canada, Malaysia, Netherlands, New Zealand, Philippines, Thailand, UAE, UK and the US from government, law enforcement, civil society, academia and the UN, attended a 3-days experts’ roundtable exploring how child sex offenders’ registries are used across various countries, learning from existing practices, and how these can be replicated in new countries.

What are sex offender registries and how can they be used to prevent child sexual abuse and exploitation?

Sex offender registries are databases of persons convicted of child sexual offences which enable law enforcement to hold detailed information about child sexual offenders—such as where they live or work. This allows police to monitor them, and this information can be used when conducting investigations regarding any new sexual offences against children. Currently, there are around 40 countries which have implemented the use of sex offender registries.

When convicted persons are placed on the registry, they often have to report to the police regularly and can be blocked from accessing certain jobs in direct contact with children. If a person on the child sex offender registry travels, countries such as the US, Canada, or Australia can inform the destination country, if there is a potential risk assessed that this person may re-offend and engage in the sexual exploitation of children. There have been some notable cases in countries such as the Philippines or the Dominican Republic, where offenders have been refused entry when informed.

concludes Sendrine Constant – ECPAT Director of Research, Learning and Communication. Through the roundtable discussion, experts were exploring what are the key considerations and promising practices that should be promoted when new countries contemplate adopting a child sex offender registry.

As a way forward, ECPAT International will continue to engage with experts to develop technical guidance, such as the GARA Action Protocol Model for Tour Guides, when countries plan to adopt a child sex offender registry and ensure these are based on experience and grounded in evidence.