As part of the Disrupting Harm Project Research focused on collecting children’s perspectives of online child sexual exploitation and abuse in 13 countries, ECPAT, UNICEF, and INTERPOL launch the Disrupting Harm Philippines report with an online event on 20 April at 14:00 – 16:00 (GMT+8). Register here. 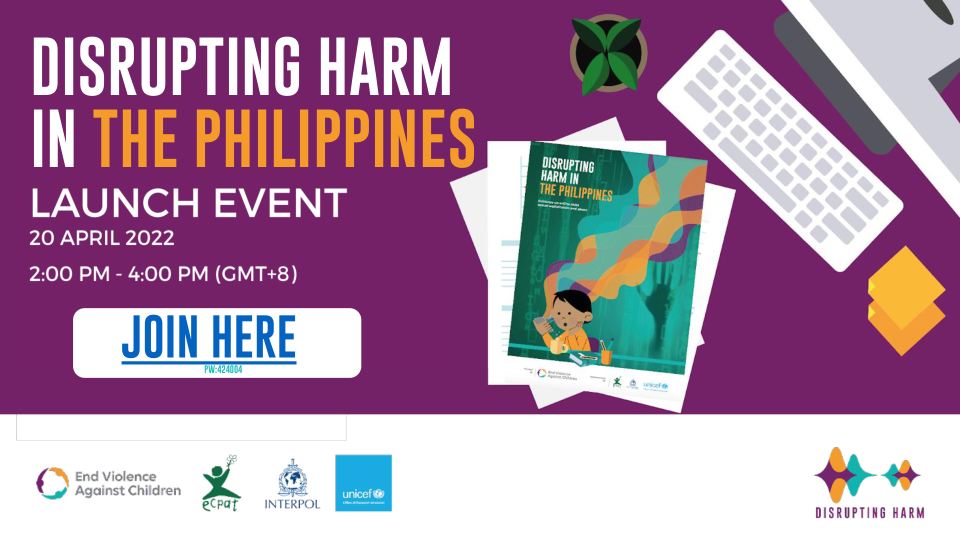 Disrupting Harm in the Philippines

The partnership between ECPAT, INTERPOL and UNICEF is one of the key aspects that make the Disrupting Harm research so unique. Without the contributions of every person working on this project, it would not have come about. Learn more here.

The internet rapidly became a staple in our everyday lives and also the lives of our children. In fact, as of 2021, 95% of 12-17 year olds in the Philippines are internet users. While this provides many benefits and opens new ways for children’s rights to be realized, including their right to learn and play, it has also created new avenues for harm to children.  One of those harms is the misuse of the internet and digital technologies to sexually exploit and abuse children. Online child sexual exploitation and abuse (or OCSEA) is a real threat in the Philippines. Our research showed that children are – right now – being targeted with online grooming, live-streaming of child abuse, sexual extortion, and are having their sexual images shared without their permission. All these crimes – new or old – require an urgent, multi-sectoral and global response.

Disrupting Harm recognizes the ongoing efforts of the Government of the Philippines, law enforcement, NGOs, the private sector and advocates who have been working on addressing OCSEA in the Philippines. These crimes and patterns of offending are changing rapidly, so we must be armed with knowledge in order to make informed decisions on how best to address this threat.

This is where research comes in – there is a lot of valuable research about OCSEA that has already been conducted in the Philippines, such as the 2021 National Study on Online Sexual Abuse and Exploitation of Children in the Philippines led by the Department of Social Welfare and Development (DSWD) – Inter-Agency Council Against Child Pornography with support from UNICEF Philippines. Disrupting Harm builds on this existing body of evidence and adds a unique aspect to the already existing evidence base in the Philippines.

By speaking to government officials, frontline workers, justice officials, and children themselves, Disrupting Harm was able to paint a comprehensive picture of the scope of OCSEA and, most importantly, children’s experiences of abuse, as well as assess the readiness of national child protection systems. Without consolidating all these voices but especially the voices of children, we would not have been able to produce a report of this measure. OCSEA is a known issue in the Philippines, and the existing efforts to tackle and prevent this violence against children are commendable. However, 20% of children are still being targeted by some of these crimes. Learn more about Disrupting Harm Methodology – Conversation with Survivors here.

We hope that the findings and recommendations of this report can further strengthen the existing efforts and resolve to address these crimes against children. Child and youth participation is central, and we look forward to hearing more from the young people participating in the launch event for Disrupting Harm Philippines on 20 April 2022.