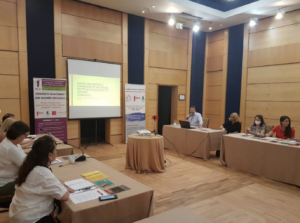 There is an urgent need to establish rehabilitation and reintegration community services for young people in Albania.

Improving criminal justice systems is not only for ensuring adult perpetrators are held accountable. Juvenile justice systems also play a key role in protecting children from being sexually exploited, and making sure that children who have already been victimized get the appropriate support they need. ECPAT research shows that inadequate Juvenile Justice systems are an issue around the world. For example, some countries criminalize children who have been sexually exploited as “prostitutes”, failing to recognize them as victims. This can lead to children trapped in a cycle of abuse, exploitation, and criminal involvement.

In Tirana, Albania, criminal offenses committed by young people continue to be a concern for justice institutions and child rights experts. According to the data of the Ministry of Justice, from 2009 – 2018, 6081 young people aged 14-18 years have been tried for committing criminal offenses.

In recent years Albania has taken steps to build an equitable criminal justice system for juveniles. The adoption of the Juvenile Justice Code and the Juvenile Justice Strategy (2018-2021) have contributed to recent advancements. However, these efforts are just beginning to have an effect on the prevention of juvenile criminalization and the rehabilitation and reintegration of children and young people.

To analyze all the achievements and shortcomings observed in the implementation of the new Strategy, CRCA / ECPAT Albania experts worked for several months on a report, which was presented at a roundtable event in late June 2021 titled “Juvenile Justice Strategy Assessment Report and positive models of juvenile reintegration in conflict with the law”. The event presented the most significant findings of TLAS, Prisons Directorate and Probation Service Directorate, State Police, representatives of Council of Europe to the Ministry of Justice officials.

The roundtable also included the presentation of some of the good practices for the rehabilitation and reintegration of children and young people in conflict with the law.

Mrs. Iris Aliaj, advisor to the Minister of Justice, underlined the fact that:

Our country has made steps forward with the adoption of the Juvenile Justice Code, as well as with the drafting and implementation of the Juvenile Justice Strategy and Action Plan. In this context, intensive work has been done to establish and make operational the Center for the Prevention of Youth Crime, which will help young people leaving the Institution for the Execution of Criminal Offenses to be reintegrated into society.

With over 25 years of experience in this field, CRCA/ECPAT Albania juvenile justice experts presented several models of rehabilitation and reintegration of juveniles in conflict with the law. CRCA / ECPAT Albania has supported over 2000 children and young people to build lives removed from crime and its impact, with free legal, psycho-social, educational, and empowerment services.

Rajmonda Bozo, Executive Director of TLAS, shared with the participants the fact that: “Although this project started in a very difficult period, such as the earthquake and then the pandemic, thanks to the extraordinary work of organizations it is being successfully implemented bringing an impact positive in strengthening a juvenile-friendly justice.”

The roundtable was held in the framework of the initiative “Hope for Children and Youth in Conflict with the Law in Albania”, which is funded by the European Union and implemented by TLAS in partnership with the European Center Foundation in Albania. This initiative aims to identify, develop and promote alternative, community-based services for children and young people in conflict with the law, in order to support their positive development.

The battle to end the sexual exploitation of children must also involve improving Juvenile Justice Systems across the world and offer better rehabilitation and reintegration. We are proud to see ECPAT members working to directly influence Juvenile Justice systems to work towards a more child-centred, victim-focused approach.

For more information, contact a CRCA / ECPAT Albania at crca@crca.al