The conflict in the Central African Republic (CAR) has made its children extremely vulnerable to being sexually exploited, says new ECPAT research.

The CAR Country Overview Report says that the country’s civil conflict, which erupted in 2012 and continues to this day, has exacerbated an already precarious situation for the country’s children, who account for about half of the 4.5 million population. 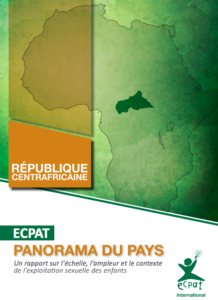 “The civil war has made children in CAR terribly vulnerable to sexual exploitation,” says Willy Buloso, Regional Coordinator for ECPAT in Africa. “Socio-economic inequalities were already present before the conflict but they have considerably worsened. At the same time, several different groups that would harm children have moved in to abuse and exploit, including belligerents in the conflict and human traffickers.”

The Central African Republic was a source, destination and transit country for the trafficking of children even before the conflict. However, children who have been forced from their homes by fighting are now particularly at risk. And with the total number of people displaced increasing by 40 percent between 2016 and 2017, ECPAT’s research says that the country has now become a “breeding ground” for the trafficking of children for sexual purposes. Extreme poverty and socio-economic disparities have “pushed a lot of children to accept sexual relations in exchange for money or even food.”

The research also reveals that some armed groups have begun forcibly recruiting children as soldiers. Many of these children are then sexually exploited by militia groups. At the same time, the conflict is fuelling an increase in child, early and forced marriage in the country. Girls in particular are targeted, and the number of children sexually exploited through prostitution is increasing.

Despite a political transition in 2016 following elections, children’s living conditions have not improved says the research. In 2016, there were more than 1,000 reported cases of sexual violence, with about 18 percent of these being victims under the age of 18. It is widely acknowledged however, that the vast majority of sexual violence goes unreported in the country.

Read the full report (in French)