5th Global Conference on the Elimination of Child Labour in Durban, South Africa 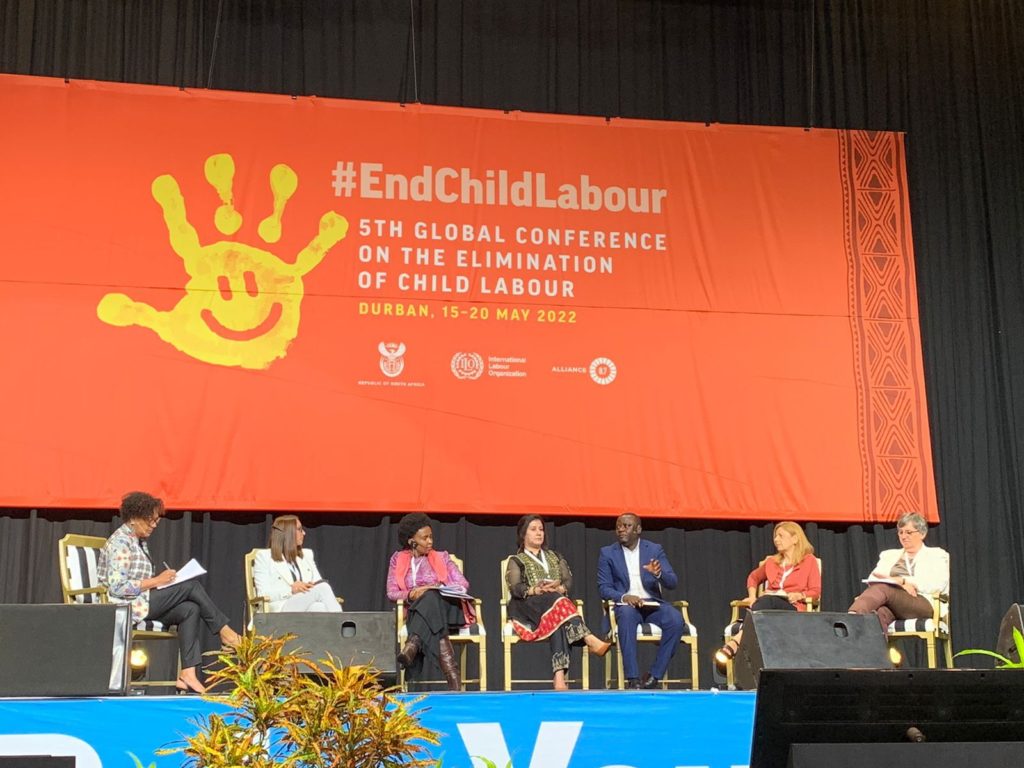 Assessing global progress made towards achieving the goals of Target 8.7: Securing the prohibition and elimination of the worst forms of child labour by 2025.

The 5th Global Conference on the Elimination of Child Labour was held in Durban between 15-20 May 2022.

Hosted by the Government of South Africa, delegates from around the world convened to identify gaps and urgent measures needed to eliminate child labour and forced labour globally.

The event brought together civil society organisations and highlighted their critical role in eliminating the worst forms of child labour by 2025. Delegates discussed the best way to strengthen engagement on the issue of child labour with other CSOs working on thematic areas different from child labour. Willy shared how ECPAT International’s work on ending the Sexual Exploitation of Children in Travel and Tourism (SECTT) could potentially intersect with measures to address child labour.

Are there any lessons to learn from ECPAT International’s work in SECTT that can be implemented in other sectors, such as child labour in agriculture or small-scale mining?

The Code (short for “The Code of Conduct for the Protection of Children from Sexual Exploitation in Travel and Tourism), a multi-stakeholder initiative aimed at equipping the tourism industry with the knowledge, tools, and support to prevent the sexual exploitation of children, is an important initiative that can be applied to other sectors.

All participating organisations are expected to fulfil key guiding principles, regardless of size. These are as follows:

The “Vulnerabilities and Child Labour” session

In this session, panellists examined the contextual, socio-political, and economic factors that contribute to child labour.

What are the countries doing with regard to the sexual exploitation of children and how does ECPAT recommend we accelerate action towards 2025?

Governments need to recognise that child labour and its worst manifestations, including the sexual exploitation of children in trafficking or prostitution, is shifting digitally.  Immediate and long-term solutions to address the root causes of child labour and its vulnerabilities require joint efforts between governments, CSOs and the relevant industries. Governments should adapt to this by moving away from traditional responses to more innovative strategies.

The sexual exploitation of children is also becoming a cross border crime—it may start in one country and end up in another. There needs to be coordination and cooperation between countries in terms of data collection and regional response.

Watch the panel on Vulnerabilities and Child Labour here.